"Any intelligent fool can make things bigger, more complex, and more violent. It takes a touch of genius - and a lot of courage - to move in the opposite direction." Albert Einstein

In the article Reproducible Low Noise Oscillators  and the Dutch article De Beste oscillator  in chapter Artikelen over Radio   I describe what should be added to the Clapp-oscillator to obtain a low phase noise Local Oscillator. The improvement is to such an extent that I incline to attach my name to the circuit: the "rutgerS'Oscillator".
Here I present a Xtal-oscillator, developed at Guido Tent's TentLabs which is based on the same principle. The Schottky diode however is no longer biased to avoid too much dissipation in the Xtal.
.

With the circuit below, the HF-voltage at the source is typical 2.5 volt, so in C" will flow: 2.5/Xc = 2.5/145 = 17 mA, which is also the current in the Xtal. If the series resistance of the Xtal is 3.5 ohm, the dissipation will be in the order of 1 mW, which is the absolute maximum value for HC49U! However, aging is no problem in this application.
On penalty of more side band noise, this power could be reduced by replacing the connection between the source and the tap C'-C" with a resistor.
.

As a radio-bug, I am interested in side band noise, or more precisely, phase noise because of reciprocal mixing in short wave receivers. In this application the noise at typically 1 kHz from the carrier is a measure of quality (-x dBc/Hz at 1 kHz).
Since a number of years Henk ten Pierick became aware of the influence of 'jitter' on the clock oscillator in digital equipment, particularly with AD- and DA-conversion. He has found that a few ps (pico seconds) could already be of great influence on the sound. Bit by bit arises the idea that the noise components close to the carrier (within 10 Hz or so) do the harm, so that I returned to the measurements in the frequency domain. These measurements are very difficult and can hardly be done with home brew equipment. With my dedicated DIY DC-receiver I can't measure absolute values closer to the carrier than 50 Hz . However R&S can! In one of the the pictures below you will find the output from a R&S FSUB Signal Source Analyzer of my clock oscillator with an LT1016 as slicer (green). In red you will find the extrapolated curve of the oscillator with a 74HC04 as a slicer, measured with my DC-receiver. Needless to say that these figures are very promising.
The circuit has proven to be reproducible within a dB.
For the selection of the Xtal, often counts: the lower the DC-current through the FET (typical < 0.5 mA during oscillation), the higher the Q of the Xtal and so the less the side band noise. This counts at frequencies around 11 MHz. But, be careful: one should still look after 'noise eruptions' which will occur with some Xtals!
In the mean time I have found a supplier of very good Xtals: QT Quarztechnik. When ordering Xtals, one should ask for the 'special polishing'. Even then Xtals should be selected for best results.
A CD-player equipped with this clock oscillator sounds totally different from the original. Of course the player should be equipped with a decent DAC and I/V-convertor with filter as shown in the article: I/V-converter (for CD-players)
.

Proto types have been put in a highly modified Philips CD624 CD-player and a home brew DAC.
A VCXO-version of the "rutgerS'Oscillator" has been applied in the universal word clock generator CC1 and the digital speaker system LS1 of GrimmAudio. 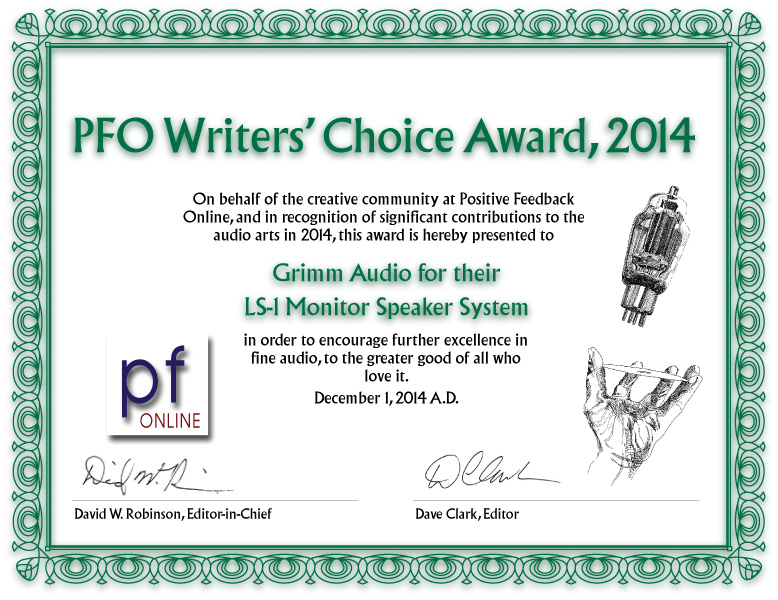 In september 2009 a significant improvement has been made by replacing the slicer LT1016 with a simple construction with five ports of a 74HC04: The first port has been connected to the 10 pF capacitor as connector 2 of the LT1016, a second one follows and the third stage consists of three ports in parallel to drive 50 ohm.
The measured sideband noise is about 10 dB less than with the LT1016 at 200 Hz upwards and even more at small distances from the carrier if updated shunt regulators from TentLabs are used! 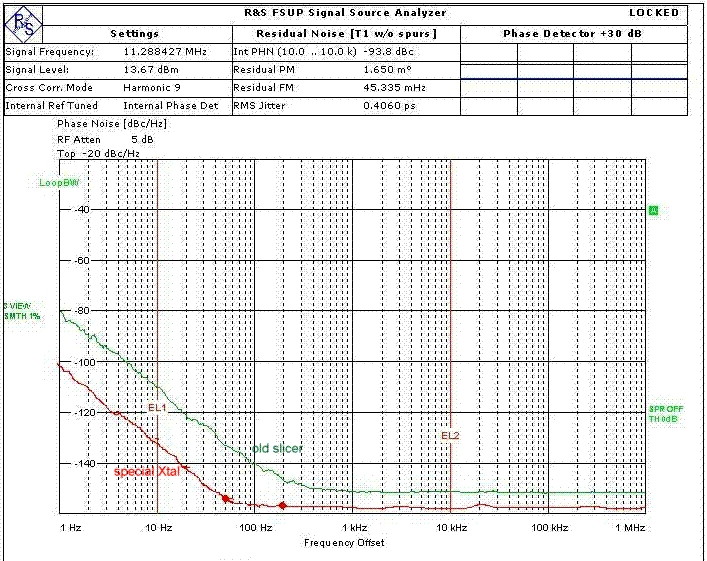 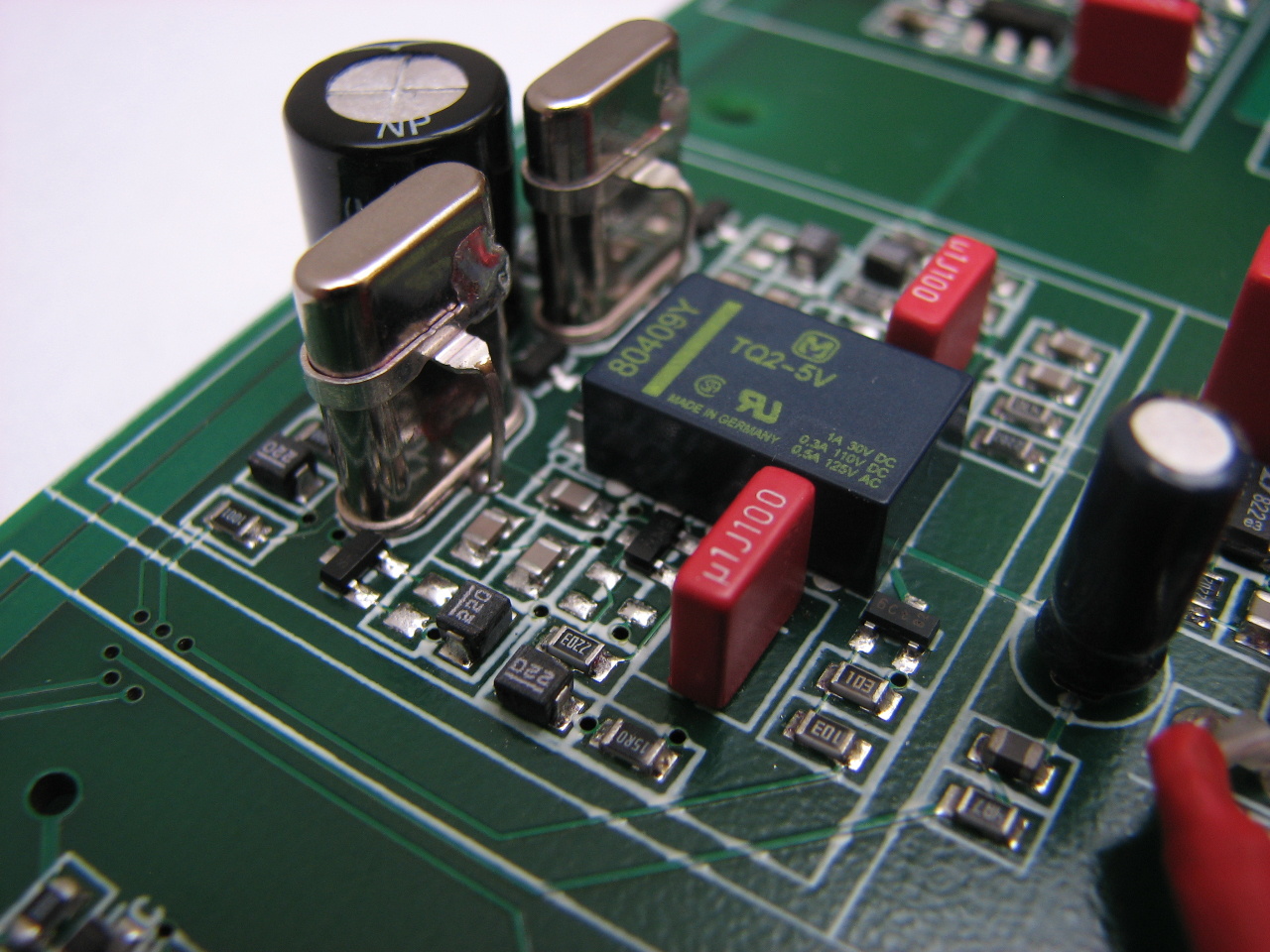